Patrick Ramsey is a retired professional football player with a Wonderlic Test Score of 32. Ramsey played the quarterback position during his career as a professional football player. He was born on February 14, 1979 in Ruston, Louisiana. He was the starting quarterback for his high school football team for two years. After high school Ramsey attended Tulane University where he set many college football records. After college Ramsey entered the National Football League's 2002 Draft. Ramsey was drafted by the Washington Redskins as the 32nd overall pick. Along playing for the Redskins, Ramsey has played for the Miami Dolphins, the Denver Broncos, the New York Jets, the Minnesota Vikings, the Detroit Lions, the Tennessee Titans, the New Orleans Saints, and the Jacksonville Jaguars. 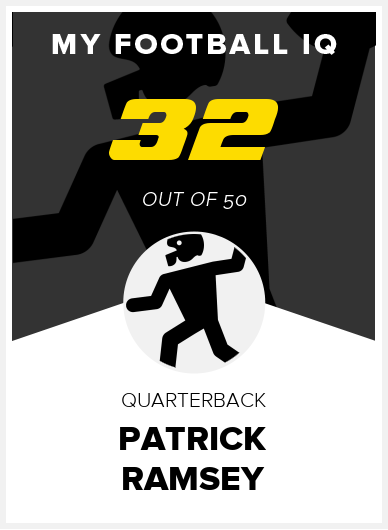