Matt Hasselbeck is a quarterback from the National Football League, who was drafted in the 6th round with the 187th pick by the Green Bay Packers in 1998. A quarterback from Boston College, Hasselbeck has currently played 18 seasons for four different teams, including the Green Bay Packers, Seattle Seahawks, Tennessee Titans, and the Indianapolis Colts. His greatest success has been as a member of the Seattle Seahawks, where he played 10 of 18 seasons and made a Super bowl appearance in Super bowl 40 in 2005. In Hassebeck's 18-year career, he has played in 209 games, and has over 36,000 yards and 212 passing touchdowns. He has an overall score of 29 on the Wonderlic Test Score. 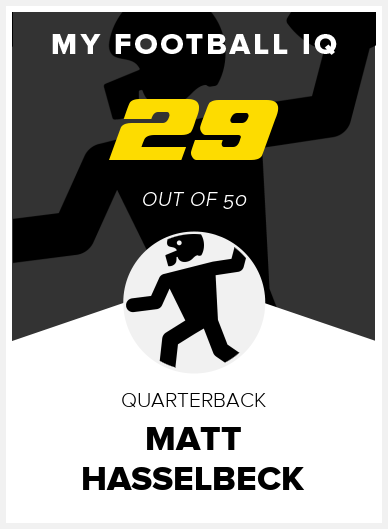