Marshawn Lynch is a recently retired running back of the National Football League, having played 10 seasons for the Buffalo Bills and Seattle Seahawks. He was a first round draft pick out of the University of California, with the 12th selection by the Buffalo Bills in 2007. Lynch had a remarkable career racking up over 9100 yards in just 10 seasons along with 74 rushing touchdowns. His career was capped by two back-to-back Superbowl appearances with the Seattle Seahwaks in Superbowl's 48 and 49, including a Superbowl victory in Superbowl 48 against the Denver Broncos. His career does not reflect the poor score he received on the Wonderlic Test Score, where he only received 14 out of 50. 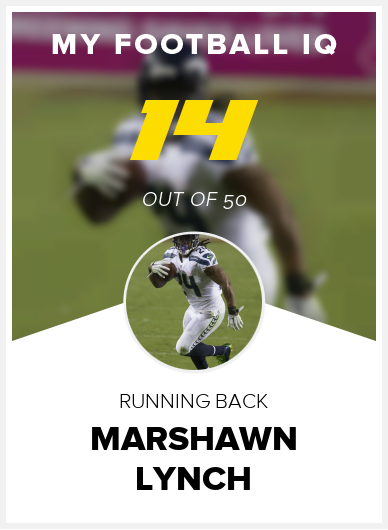