Marc Bulger is a former professional football player who has a Wonderlic Test Score of 29. Burger played the quarterback position during his college and professional football careers. He was born in Pittsburg, Pennsylvania on April 5, 1977. Burger played college football for West Virginia University. After college, Bulger entered the 2000 National Football League Draft. He was drafted to the New Orleans Saints as the 168th overall draft pick. After his short stint with the Saints and the Atlanta Falcons, Bulger played several seasons with the St. Louis Rams. During his time with the Rams he was named the 2004 Pro Bowl MVP. He was a 2001 National Football Conference Champion. He was also the National Football Conference's passing yards leader during 2003. 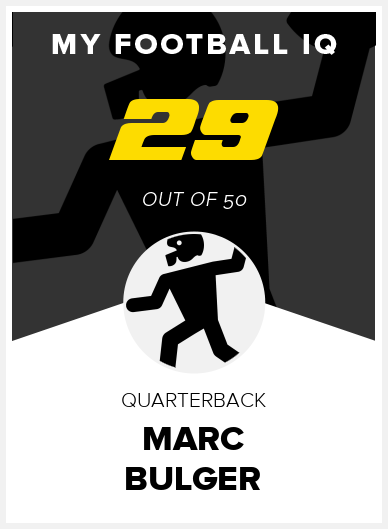