JT O'Sullivan is a former professional football player with a Wonderlic Test Score of 35. He was born on August 25, 1979 in Burbank, California. He went to Jesuit High School in California where he played both baseball and football. After high school O'Sullivan played college football for the University of California at Davis. While at the University of California at Davis, O'Sullivan set records for touchdown passes in a post season game. His finished his college football career with 10,745 passing yards. After college O'Sullivan entered the 2002 National Football League Draft. He was drafted by the New Orleans Saints as the 186th overall pick. O'Sullivan later played for the Green Bay Packers, the Chicago Bears, the Minnesota Vikings, and the Carolina Panthers. 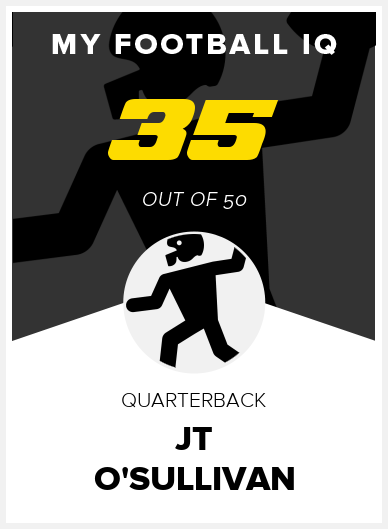