Jordan Palmer is a professional football player who has a Wonderlic Test Score of 23. Palmer was born on May 30, 1984, in Westlake Village, California. Palmer attended Mission Viejo High School as a teenager. After graduating from high school, Palmer attended the University of Texas El Paso where he played college football. After College, Palmer entered the 2007 National Football League Draft. Palmer was chosen by the Washington Redskins as the 205th overall draft pick. Palmer subsequently played with the Cincinnati Bengals, the Jacksonville Jaguars, the Chicago Bears, the Sacramento Mountain Lions, and the Tennessee Titans. Palmer is currently a free agent. Palmer has a career 59 passing yards and a quarterback rating of 34.4. 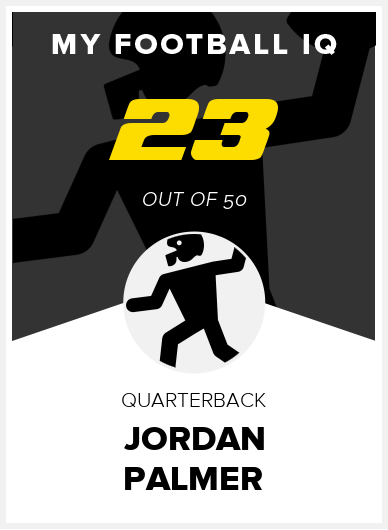