John Mobley is a retired professional football player with a Wonderlic Test Score of 27. Mobley played the linebacker position during his professional football career. He was born on October 10, 1973 in Chester, Pennsylvania. He attended Chester High School as a teenager. After graduating from high school Mobley attended the Kutztown University in Pennsylvania. After college Mobley entered the 1996 National Football League Draft. He was drafted by the Denver Broncos as the 15th overall draft pick. Mobley played his entire professional career with the Denver Broncos. During his time with the Broncos, Mobley was named an All-Pro player in 1997. He also won two Super Bowl championships with the Denver Broncos. John Mobley has a career 634 tackles. 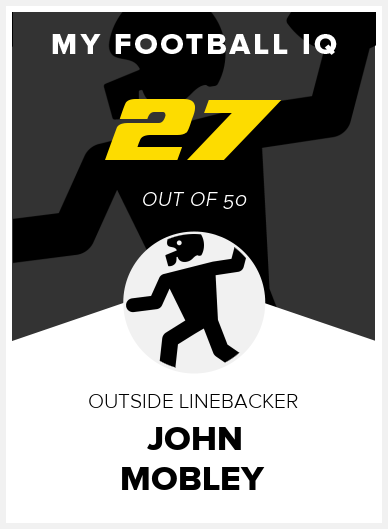