Testing is somtehing NFL players have become used to over the years , which now includes the use of the Wonderlic test to guage intelligence levels. Former Washington Redskins and Oakland Raiders Quarterback Jason Campbell was given a Wonderlic test score of 23 that is higher than the average intelligence level of 20. The former Auburn college football player was a first round draft pick for Washington in 2005; the college career of Campbell came to an end with him named the MVP of the Sugar Bowl. Campbell stayed with Washington from his drafting in 2005 through 2009 before moving on to the Oakland Raiders; Jason Campbell also played for the Chicago Bears, Cleveland Browns, and Cincinatti before retiring from football at the end of the 2014 season. 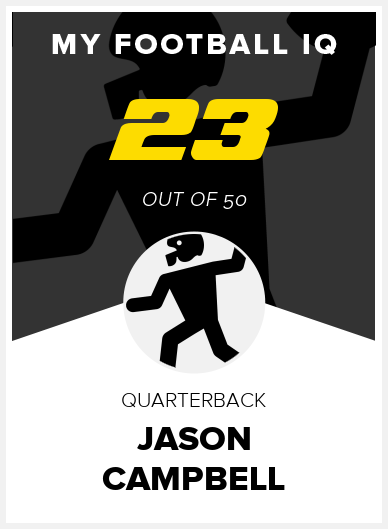