Jared Zabransky scored a 36 on his Wonderlic Test Score. His score ranks rather high among all-time completions of the test by NFL quarterbacks. Zabransky attended
college at Boise State University. He was drafted by the Houston Texans in the 2007 NFL Draft. He is most commonly recognized as the genius behind the Statue
of Liberty play run with teammate Ian Johnson to defeat Oklahoma in the 2007 Fiesta Bowl. He took home MVP honors in this game for his contributions towards his
team's victory, but that play will live forever in the College Football history books. Zabransky lasted for a brief stint in the NFL and the Canadian Football League. He is currently no longer a member of the NFL. 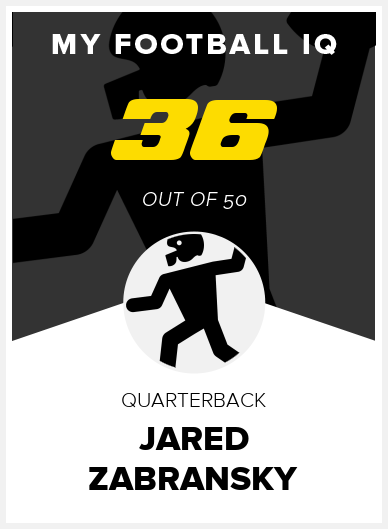