Dave Bryant was a former AFL Quarterback who attended Duke University. A native of Detroit, MI, Bryant holds top ten records at Duke for pass attempts, completions, yards and touchdowns. Bryant was also known for his quick decision making and ability to be a solid rusher at Quarterback. In 2001, Bryant had his best season at Duke, where he completed 187 of 384 passes for 2454 yards and 11 touchdowns, and set the 11th highest single passing total, passing for 400 yards against NC State, and set the record for most consecutive completions in a game in Duke history (16). Bryant aspired to enter the NFL Draft as a late round pick, achieving a 23 on the Wonderlic Test Score, a score that put him around the league average. Bryant went on to play in the Arena Football League, where he was named an All-Rookie in 2008 for the Kansas City Brigade. 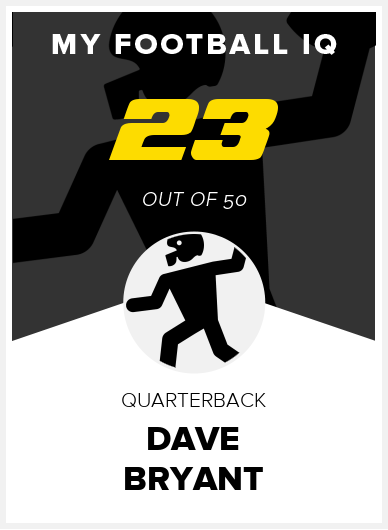