Colt Brennan's career playing quarterback has included a number of unique stops. He played his high school ball at California's Santa Ana Mater Dei. From there, the winds of recruiting blew him to the University of Hawaii. As a Rainbow Warrior, Brennan grew his hair into dreadlocks and called some of his plays in Samoan to show a kinship with his teammates. In 2008, with Wonderlic Test Score of 24, Brennan was drafted by the Washington Redskins in the sixth round. He had a successful rookie season, but injuries sidelined him in 2009. After the NFL, Brennan bounced around three football leagues, including a stint trying to get on with Gene Simmons's Los Angeles Kiss of the Arena Football League. 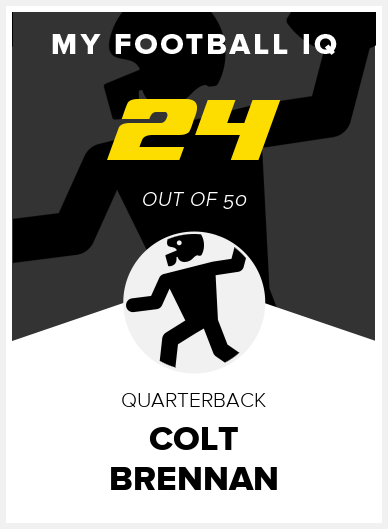