Carlos Hyde is a running back from Ohio State. His senior year started with his suspension for 3 games after a bar incident. But Hyde came back to finish the year with 1,282 yards and 14 rushing touchdowns, and made the All-Big-Ten first team.

When Hyde was drafted by the 49ers in 2014, the backfield was already crowded, but injuries gave him a chance to play. By the 2015 season, he was named starter. Hyde ran 168 yards and scored 2 touchdowns against the Vikings. But foot surgery intervened, and he was placed on injured reserve in December.

Hyde's Wonderlic test score was 9, which is below average. But he's concentrating on bouncing back with the 49ers in 2016. 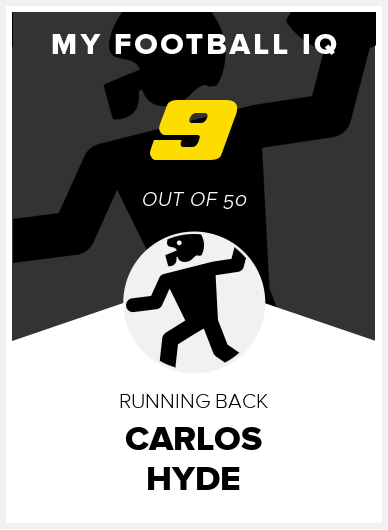