Bruce Gradkowski is a professional football player with a Wonderlic Test Score of 19. Gradkowski played the quarterback position during his professional career. He was born on January 27, 1983 in Pittsburg, Pennsylvania. He played high school football for Seaton-La Salle Catholic High School in Pennsylvania. After high school Gradkowski played college football for the University of Toledo. Gradkowski was the starting quarterback during his sophomore year at Toledo. During that season he set a school record of 29 touchdowns. After college Gradkowski entered the 2006 National Football League Draft. He was drafted by the Tampa Bay Buccaneers as the 194th overall pick. After a season with the Buccaneers, Gradkowski played with several teams, including the St. Louis Rams, the Cleveland Browns, and the Cincinnati Bengals. 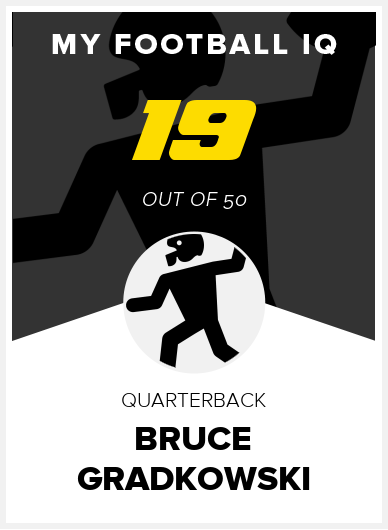