Brian Brohm is a former professional football player with a Wonderlic Test Score of 32. Brian played the quarterback position during his professional career. He was born on September 23, 1985 in Louisville, Kentucky. Brohm played high school football for the Trinity Shamrocks in Louisville. After high school Brohm played college football for the University of Louisville. Brohm lead his team to an Orange Bowl victory in 2007 against Wake Forest. During that game he completed 24 out of 34 passes. After college, Brohm entered the 2008 National Football League Draft. Broom was drafted by the Green Bay Packers as the 56th overall draft pick. After a season with the Packers, Brohm was traded to the Buffalo Bills. Brohm is currently a quarterback coach at Western Kentucky University. 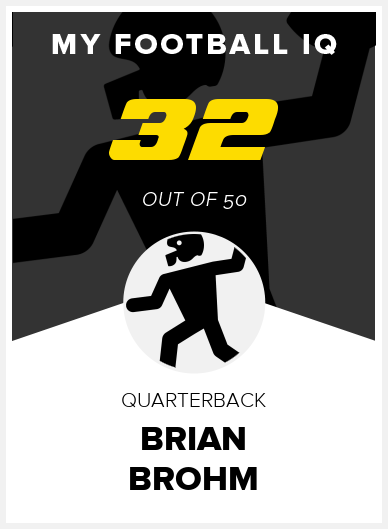