Brandon Weeden is a quarterback who played his college ball at Oklahoma State. Weeden was drafted by the Cleveland Browns in 2012. He got off to a rough start, but defeated AFC North rivals Cincinnati and Pittsburgh that year, and ended up throwing for 3,385 yards, a Cleveland rookie record.

The 2013 season was difficult for Weeden, as injuries and poor performance forced him to sit out games in favor of Jason Campbell and Brian Hoyer. In 2014 he went to Dallas as Tony Romo's backup, where he remained in 2015. That year he was waived, and picked up by the Texans.

Weeden's Wonderlic test score was 27, a good score in keeping with a quarterback's more cerebral position. 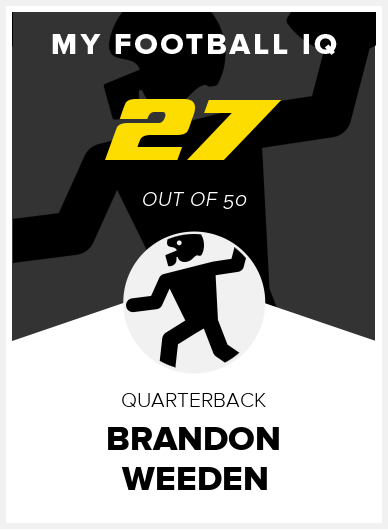