Had he attended the NFL Combine last year, there is no doubt that Bradley Chubb would have come away with a position on one of the top NFL teams in America. Instead, he elected to remain at NC State for an additional year and sharpen his arsenal even more, crafting his talent into an unstoppable force of speed and endurance that have allowed Chubb to make successful plays during important times in a game. As a pass-rushing prospect, he is second to none in his class, and was voted the nation’s top defender in his senior year, which is exactly why the NFL cannot wait to deploy someone like Bradley Chubb on the field, someone whose intuition and talent can allow for some history-making plays and sacks. It’s no wonder that the Colts, Browns, and Buccaneers have all been looking for the perfect opportunity to attract Chubb to their team.

Most scouts and coaches have remarked on how relentless Bradley Chubb is on the field, as well as in training, where he keeps a light-hearted spirit about his work, but executes his performances flawlessly. At 275 pounds, 6”4’, with a 36 inch vertical leap makes this man a wolf in rhino’s clothing, since his size and intelligence both converge on the field to offer a very impressive view at the heights Bradley Chubb will one day achieve. 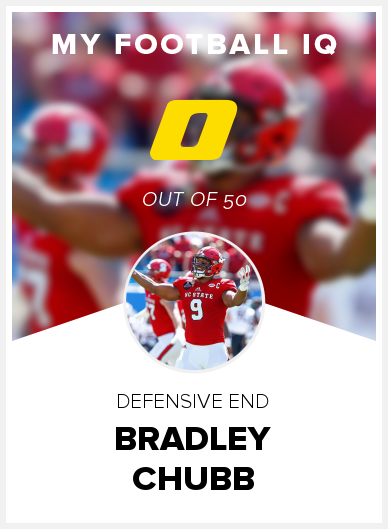