Brad Banks is a retired professional football player. Banks has a Wonderlic Test Score of 13. He was born on April 22, 1980 in Belle Glade, Florida. He played high school football for Glades Central High School. During high school Banks was named to the First-team All-Conference. After high school Banks briefly attended the University of Central Florida. He later transferred to Hinds Community College. After a few season as Hinds Community College, Banks transferred to the University of Iowa. During his time at the University of Iowa Banks was recognized as an Second-team All-American player and Big Ten Conference Most Valuable Player. After college Banks entered the 2003 National Football League Draft, but was not drafted. Banks briefly signed with the Washington Redskins. He has also played for the Orlando Predators, the Montreal Alouettes, and the Iowa Barnstormers. 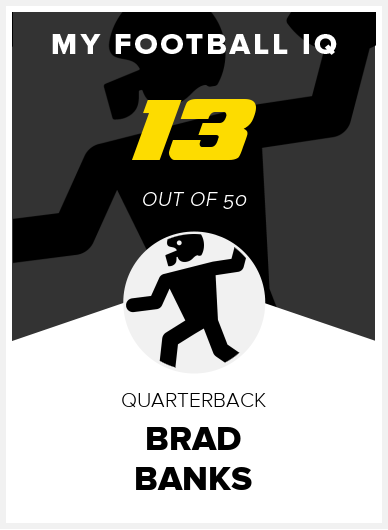