Playing on the blue turf of Boise State University, Bart Hendricks had the highest passer rating among college quarterbacks in 2000. With a Wonderlic Test Score of 22 but considered well outside the top ten of quarterback prospects for 2001, Hendricks went undrafted by any NFL teams. Instead, he made the squad of the Frankfurt Galaxy, for whom he played in 2002. For three seasons from 2002 to 2004, Hendricks was on the roster of the Edmonton Eskimos. He was a backup for the Edmonton team that won the CFL's Grey Cup in 2003. After 2004, Hendricks retired from pro football. In 2014, Hendricks was named Director of Development for his alma mater's athletic department. 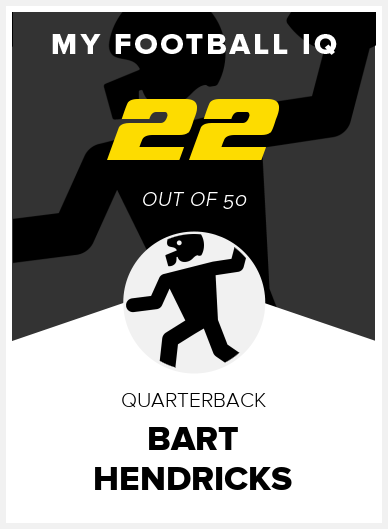