This year’s most anticipated draft player, Baker Mayfield, has scored the second highest score ever on the Athlete IQ test, or AIQ. The AIQ, a modernized version of the Wonderlic test - a test designed to measure player performance under stress - has been in development with the NFL since 2012, and is being used with existing Wonderlic scores to allow coaches to find the players with the best mental form for their team.

On the Wonderlic, Mayfield scored a 25, making him well above-average when compared to the average player score of 20. His overall athleticism and on-field performance is only enhanced by an above average intelligence and ability to perform impressively during moment of extreme stress. His former, more formative years playing multiple sports in high school have given him a natural edge on the field, allowing him to draw on a wealth of experiences far beyond that of football, which is a handy arsenal for someone as intuitive, capable, and intelligent on the field as Mayfield. 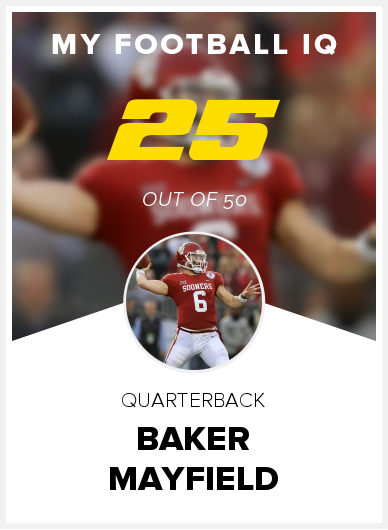