In 2005, when Aaron Rodgers entered the NFL draft pool, most pundits, experts and particularly San Francisco 49ers fans expected Rodgers to be selected first overall by the 49ers. Rodgers grew up in Chico, California, played collegiately at University of California, Berkeley and had the stats, experience and talent that impressed scouts.

Then, the 49ers selected Alex Smith. Rodgers slipped all the way to 24th in the draft, when the Green Bay Packers made him the second quarterback selected. In a rare quirk of the draft order, 22 consecutive teams had more pressing needs than quarterback, contributing to Rodgers’ massive drop.

Why take Smith over Rodgers? Could it be the Wonderlic test results?

There were three quarterbacks drafted in the first round in 2005. Smith first, Rodgers 24th and Jason Campbell 25th. Interestingly, they were drafted in the order of their Wonderlic test scores.

In the years since the 2005 draft, Rodgers has proven to be undoubtedly the most valuable pick of the year. Due to his sure-to-be Hall of Fame NFL career and the drama that was his fall in the draft, many refer to that year as the Aaron Rodgers draft.

Rodgers began his career on the bench, backing up Brett Favre for three years before becoming the starting quarterback in 2008. Since then, Aaron Rodgers’ career stats are some of the best ever, with many Packers anointing him the best quarterback to ever play in Green Bay.

Through the 2015 season, Rodgers has one Super Bowl victory to his credit (and he was named MVP of that game), has appeared in five Pro Bowls and has been named a first-team All-Pro twice (2011 and 2014) and a second-team All-Pro in 2012.

How much of Rodgers’ success could’ve been predicted by his Wonderlic score?

Out of a maximum of 50, the average score for all NFL players is 21. The average score for quarterbacks is 26, and Aaron Rodgers’ Wonderlic score of 35 is in the 96th percentile, meaning he’s smarter than 96% of humanity. Can you beat his score? Find out right now. 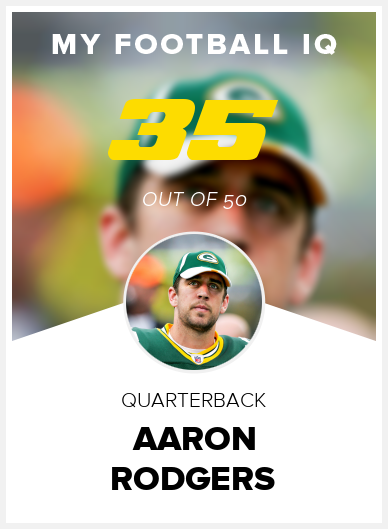